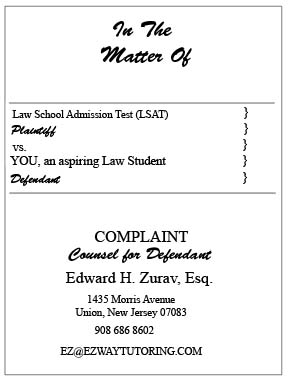 Whereas: The law school admissions process is a competitive procedure through which thousands of law school applicants are required to go each year, and …

Whereas:  Maximizing your LSAT score is one of the most important challenges you will face on the difficult journey which faces all prospective lawyers, and…

Whereas: Each year many applicants fail to achieve LSAT scores that reflect the applicants’ abilities accurately or that are sufficient to secure acceptances into law schools of the applicants’ choice despite otherwise acceptable credentials, and…

Whereas: Law school admissions officers frequently recommend the benefits of individual tutoring over commercial group preparation for the LSAT, and…

Whereas: Only one LSAT preparation program in the greater New York/New Jersey area, E-Z WAY TUTORING, offers exclusively one-on-one tutoring using unique tried and true techniques which have proven to be effective and have been refined and perfected since 1983, and…

Whereas: For over two decades over 90% of the pupils who have completed the E-Z WAY TUTORING program have secured acceptance into an accredited law school within two years of completion of the program, and…

Whereas: Mr. Zurav gives his pupils the benefit of his experience garnered while assisting well over 1000 current attorneys as they went through the complicated law school admissions process since 1983, and…

Whereas: E-Z WAY TUTORING is the ONLY LSAT preparation program that directly links the LSAT to the skills which lawyers utilize daily and stresses improvement in important lawyerlike skills such as speed readingand comprehension as well as concentration enhancement, and…

Whereas: With E-Z WAY and no other course you’re GUARANTEED to be individually tutored by an attorney who possesses an IQ certified to be above the genius level.

THE VERDICT OF E-Z WAY’s GRADUATES

I am writing to inform you of the great score I achieved on the February LSAT and once again thanking you for your beneficial tutoring skills. I have already been accepted to Seton Hall and six other reputable law schools. I feel that E-Z Way Tutoring was a major contributing factor to my LSAT success.Your instruction and various tutoring skills are incomparable.

I was informed on 25 April that I had been accepted for admission into New York Law School’s fall class. I believe that your help was the main reason I was able to gain acceptance.

Without your one-on-one style of tutoring, I never would have been able to raise my score six points. There is absolutely no comparison between your method of preparation and the standard LSAT prep courses.

Before I enlisted your help, I was struggling to find a law school to accept me and my woeful 51st percentile LSAT. With your guidance and some dedicated work I scored in the 93rd percentile on the December LSAT. The few hundred dollars I spent on your services would be considered money very well spent. Because I scored above the 90th percentile, I received a $4,000 scholarship from the University of Georgia. Now that’s what I call BANG for your buck!

I’m writing to thank you for tutoring me for the LSAT. Your preparation was not only responsible for producing a competitive LSAT score but also for my acceptance into the Rutgers Law School in Camden, the New England School of Law and the University of Baltimore School of Law.

Following extensive in-depth research, Mr. Zurav analyzed the particular skills and aptitudes measured by the LSAT. He discovered that these same skills and aptitudes were used continuously by law students and attorneys. Mr. Zurav then developed a unique instructional program designed to maximize theseskills and aptitudes in his pupils. The result is the E-Z Way method of tutoring that has aided numerous students in achieving acceptable LSAT scores, even after other LSAT preparation courses have failed to help.

The E-Z WAY method improves a pupil’s ability to perform in law school as well as on the LSAT.The ability to input information and organize it quickly for immediate accessis used daily by legal practitioners. Mr. Zurav teaches his pupils to read and comprehend more efficientlyand to think in a logical, orderly lawyerlike fashion.

Mr. Edward H. Zurav was born in 1956 and raised by a special education teacher and an attorney. He received his high school degree from the Pingry School, from which he graduated in 1974. Based on his success on standardized tests in high school, he was designated an National Merit Scholar. He exceeded genius-level requirements when he sat for his Law School Admissions Test, his Graduate Record Exam and his Graduate Management Aptitude Test.